Peng Shuai has spoken to independent media for the first time since raising sexual assault allegations against a former high-profile Chinese politician.

“First of all, I would like to thank all the ATP and WTA players, all the athletes and all the personalities in large numbers who cared about me,” Peng said.

“But I didn’t think there would be such concern and I would like to know: why such concern?

“I never disappeared, everyone could see me,” Shuai said.

“What happened – I already answered this question, during an interview in Shanghai as well as by an email addressed to the WTA, and many other emails.

“This post has given rise to a huge misunderstanding from the outside world. I hope that we no longer distort the meaning of this post. And I also hope that we don’t add more hype on this.”

Not for the first time, Peng also retracted the sexual assault allegations she had made against former Chinese vice-premier Zhang Gaoli in November.

“I never said anyone sexually assaulted me,” Peng said.

“I never disappeared. It’s just that a lot of people, like my friends, including from the IOC, messaged me, and it was quite impossible to reply to so many messages.

“But, at the end of the year, their website’s communication computer was changed and many players had difficulty logging in at that time.

“But we always kept in touch with colleagues. That’s why I don’t know why the information that I had disappeared, spread.” 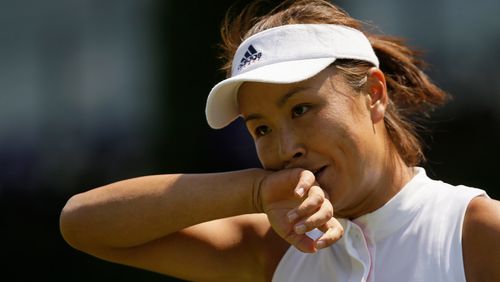