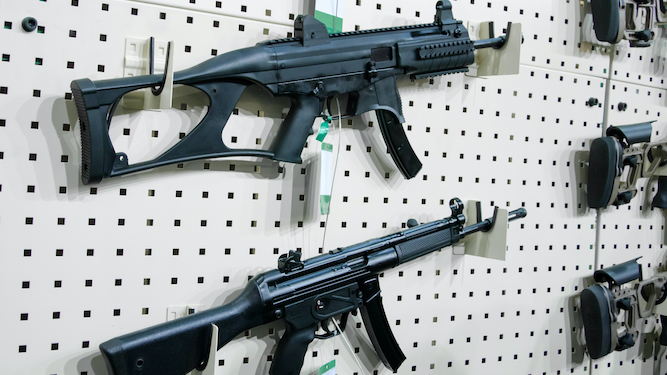 ROE vs Wade has been overturned, so who has more rights in the US: a woman, or an AR-15 assault rifle? Find out which you are:

Are your rights enshrined in the US constitution?

A) Yes. Thomas Jefferson, George Washington and Abraham Lincoln foresaw the world that would come with such clarity that they made sure to protect me with the second amendment. What vision they had.
B) No. I kind of thought they were, but it turns out it was merely an interpretation of the law that was erroneous, according to five judges who make no secret of their political bias, and I no longer have autonomy over my own body.

Is there a powerful nutjob advocacy group defending you?

A) ‘Nutjob’ is a defamatory term. It’s just a group of organised men with a keen interest in firearms, explosives and all things military, who regularly threaten street warfare if they don’t get their way.
B) Not really. I mean there’s the Democrat party, who are nominally in power, and there’s the president, but neither of them really do anything. A huge number of rational people will march against this decision and will be branded nutjobs.

What state are you in?

A) The great news is it doesn’t matter, as the Supreme Court decided that second amendment rights are too important to be delegated to states. Those guys always have my back.
B) Unfortunately in one of the states that wasted no time taking the rights delegated to them by the Supreme Court and enacting a total ban.

Are you a man?

A) Technically I’m without gender, but I like to think of myself as definingly male.
B) No, I’m a woman. When all my rights get taken away without my being consulted, surely it’s obvious?

A) In a sense, yes, but pregnant with death. Which is just as legally valid as the other kind.
B) I am not at liberty to reveal that information as it may implicate me in a serious crime.

Mostly As: Congratulations, you’re a gun! A FN SCAR 16S to be exact, fast, accurate, recoil-free and fully protected in law. You may go about your business without interference.

Mostly Bs: Bad news; as a pregnant woman you’re not capable of making your own decisions for yourself and your future, so your rights have been removed for your own safety. Otherwise there was a real risk you might kill.