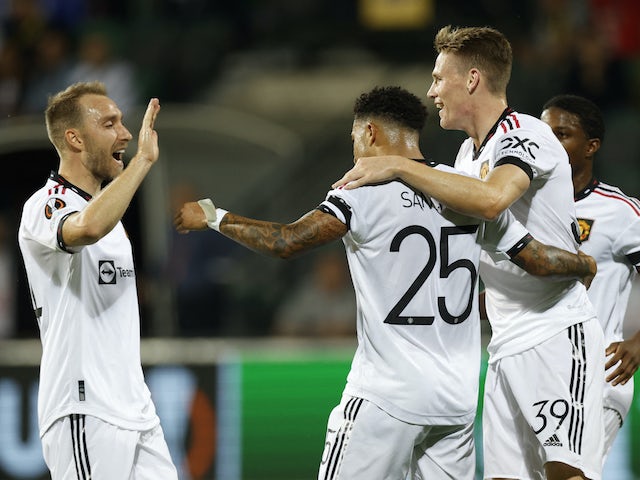 Manchester United head coach Erik ten Hag hints that the club will be active during the January transfer window.

Manchester United head coach Erik ten Hag has hinted that the Red Devils will be active during the January transfer window.

The club spent heavily over the summer, with Tyrell Malacia, Christian Eriksen, Lisandro Martinez, Casemiro and Antony all arriving on permanent deals, while Martin Dubravka made the move to Old Trafford on loan from Newcastle United.

A recent report claimed that Ten Hag will be handed as much as £70m during the winter market, while the budget would be boosted to over £100m if Cristiano Ronaldo leaves.

Man United recorded a 2-0 victory over Sheriff Tiraspol in the Europa League on Thursday evening, and the team are now not back in action until the start of October against Manchester City.

The Red Devils had been due to face Leeds United in the league this weekend, but the fixture was postponed due to the logistics surrounding Queen Elizabeth II’s funeral.

Ten Hag has said that “such breaks” are “useful” for the club, with the Dutchman revealing that transfer meetings would be held this month with a view to possibly spending in the January market.

“Always to use such breaks [is] useful,” Ten Hag told MUTV. “We have many meetings, we have to improve the structures in and around the club, we will do.

“We will also look to the window in January or next summer already but also to improve our way of playing by making plans and, of course, this coming period with every third day a game we have to get ready for that.

“The players: 90% is away, the others will train proper and for the rest we have to prepare very well and I hope everyone stays fit, return, healthy back and we have to go in and attack.”

Man United started their 2022-23 campaign with back-to-back losses to Brighton & Hove Albion and Brentford but have since won their last four in the Premier League against Liverpool, Southampton, Leicester City and Arsenal.

The Red Devils lost 1-0 to Real Sociedad in their first Europa League match last week but bounced back with a two-goal victory over Sheriff in Moldova.

Malacia, Martinez, Eriksen and Antony have all been regulars for Man United since their arrivals, but Casemiro has found it difficult to break into the starting side due to the form of Scott McTominay.

The campaign will break in November for the 2022 World Cup and then not resume until Boxing Day, with the 20-time English champions due to welcome Nottingham Forest to Old Trafford on December 26.