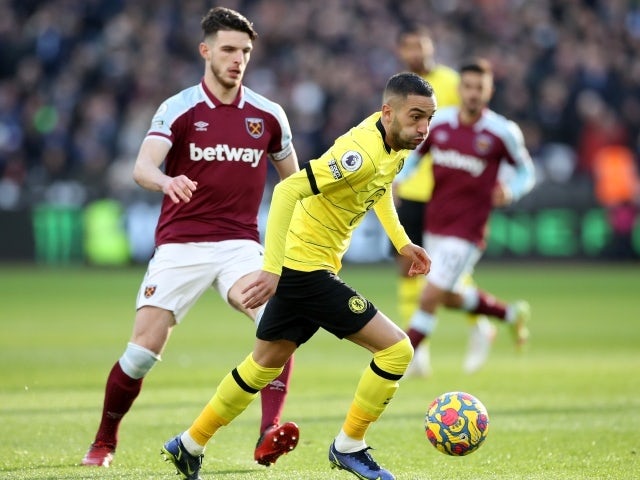 Hakim Ziyech is reportedly prepared to reduce his wages this summer in order to help facilitate a transfer away from Chelsea.

Hakim Ziyech is reportedly prepared to up his efforts to engineer a transfer away from Chelsea this summer.

The former Ajax man has enjoyed a relatively successful period at Stamford Bridge, winning the Champions League and Club World Cup during his two years at the club.

However, the 28-year-old has not always been regarded as a first-team regular by Thomas Tuchel, making just 29 starts in the Premier League across two campaigns.

Although Ziyech has gone on to feature on 83 occasions in all competitions, as many as 33 outings have come from the substitutes’ bench.

For a number of weeks, the playmaker has been heavily linked with a switch to AC Milan, but the Serie A champions are yet to press ahead with a formal approach.

While a proposal may be put forward in the future, it appears that Ziyech is prepared to do what he can in order to finalise a move away from Chelsea over the coming weeks.

According to Calciomercato, Ziyech is prepared to accept a less lucrative contract elsewhere in order to take on a fresh challenge.

Milan are said to welcome that move by Ziyech, but the report claims that the Italian giants must boost their own financial position in order to press ahead with their plans to sign the player.

I Rossoneri still want the initial agreement to be a season-long loan with the option of signing Ziyech on a permanent basis ahead of 2023-24.

Ziyech is not the only Chelsea winger being linked with a move to Serie A with Christian Pulisic said to be an option for Roma.

Earlier this week, it was suggested that Chelsea may attempt to swap the United States international with Nicolo Zaniolo, the pair each having two years left on their contract.

Callum Hudson-Odoi is also being tipped to move to a different club having been left out of the squad for the Premier League opener with Everton last weekend.

Timo Werner has already been allowed to depart Chelsea with the attacker returning to former club RB Leipzig.