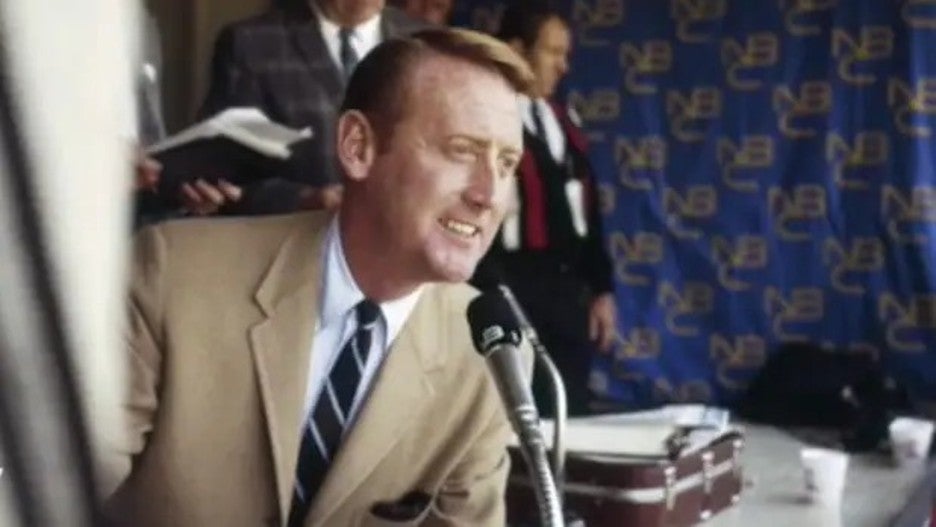 This tribute to Vin Scully was originally published in 2016, when he formally retired. In light of his death on August 2 at age 94, it has been slightly revised and reposted.

Hollywood may be known for its storytellers, but the greatest of them never wrote a script, cast an actor or called “action!” to put his tales on the big or small screen.

That’s because Vin Scully only needed a microphone to tell his stories.

In a sport, baseball, that produced many of sport’s best chroniclers – Roger Angell in the New Yorker, Doris Kearns Goodwin in memoir, Ken Burns in documentaries, Harry Caray in the broadcast booth, W.P. Kinsella and Philip Roth in novels – Scully, who retired at the end of the 2016 season after an astounding 67 years as the voice of the Los Angeles (and before that, Brooklyn) Dodgers, remains the best of them all.

In a format designed for play-by-play, he found poetry.

“There is no more important broadcaster in the history of baseball than Vin Scully,” filmmaker Ken Burns (“Baseball,” “The Civil War”) told TheWrap. “He has been a voice in our ear for decades and decades, and he does it better than anyone else. He does it perfectly… He’s Zeus.”

And now Scully is gone, ending his career with a remarkable two weeks in which the Dodgers game him an emotional ceremony on Vin Scully Appreciation Day, and then an amazing walk-off win to clinch the division championship in the last home game of his career, and then three final games in San Francisco, home of the Giants, the team he first loved when he became a baseball fan 80 years to the day before his final broadcast. And as the days dwindled down to a precious few (to quote a line from “September Song” that Vinny often cites toward the end of the season), many of us went into mourning as we anticipated never again encountering the effortless, casual authority of a Vin Scully broadcast.

Of course, it’s not really effortless and it only seems casual; the man does his homework every day and works hard to make it sound easy. Just as Dodger fan Frank Sinatra was simultaneously the most conversational and the most commanding of singers, Vin Scully is both the most offhand and the most authoritative of broadcasters.

I’m not really interested in figuring out why Scully is the best, or in trying to explain exactly why what he does is so singular. I simply have my own stories about the presence he has been in my life, as does everybody else who listens to and loves him.

I remember weekends when I was growing up an hour south of Los Angeles, hanging out with my dad in the garage while listening to Vinny on the radio. I remember those precious, occasional trips to Dodger Stadium in the 1960s, when so many fans brought transistor radios to the game that you could hear his stories wherever you were sitting.

I remember that the Dodgers used to have a marketing man, Danny Goodman, who put together packages of souvenirs aimed at kids. You’d send it your $2 – it was always $2, never more – and get back a pennant, a signed photo and whatever else was in Danny’s goodie bag that month.

I sent in my two bucks lots of times, but I couldn’t tell you what I got except for one item: a 45 rpm record of Vinny’s play-by-play of the last three innings of Sandy Koufax’s perfect game in 1965.

I bought it and probably played it more often than I played “Rubber Soul,” which came out around the same time. And then, somewhere along the line, I lost it. Of all the records I had back then, that’s the one I most wish I had hung onto.

As I got older, the Dodgers were always there and so was Vinny. And just as he was the voice of my childhood, it came full circle and I listened to him with my own son 30 years later – not while working in the garage on the weekend, maybe, but anytime and anywhere.

I have no idea how many games I’ve heard him broadcast, but it’s certainly in the thousands. I never met him, though when Tom Sherak was president of the Motion Picture Academy, we had our share of conversations over lunch about our love of the Dodgers. Tom kept telling me that my son and I should rendezvous with him at a game so he could take us to the broadcast booth to meet Vinny, who was a close friend and neighbor of his.

I knew that one day I’d take him up on the offer. And then Tom died before I ever did.

Really, though, did I need to meet Vinny? I mean, I once met another Dodger icon, Tommy Lasorda, and it was hugely disappointing.

But meeting Vinny wouldn’t be disappointing. That’s because I already know him. We’re friends. Me and him and everybody else who ever listened to him.

And that’s what I’ll miss next year, and every year after that. My friend.

It’s an eternal black mark on Dodger ownership that corporate greed kept Vinny’s last seasons from most L.A. television viewers, a dispute that was finally resolved after he’d left. It’s also sad that his legacy seems to be honored only by words, not by imitation.

Vinny was one person, talking to you and me and every other listener. Now, every booth seems crammed with two or three people, including former players whose idea of analysis seems to be telling us all the good things that might happen for the Dodgers.

Vinny had enormous affection for and knowledge of the team, but he never referred to them as we, and he was never a homer. He was far more generous and far more curious than to approach the game through the lens of what his team might do to win.

For years after his retirement, Vinny was a presence at Dodger Stadium: The press box was named after him, the salutes to him were scattered throughout the ballpark and you never knew when he might actually show up.

Now you know he’s not.

I am drawn back to a sadder occasion, when Elvis Presley died and Lester Bangs wrote a brilliant appreciation that ended with these lines: “I can guarantee you one thing: we will never again agree on anything as we agreed on Elvis. So I won’t bother saying good-bye to his corpse. I will say good-bye to you.”

I feel the same way. In Vinny’s final season, the Chicago Cubs turned one of their own broadcasts of a Cubs-Dodger games over to him for an inning, and I saw Cubs fans on Twitter celebrating him. These days, my favorite baseball chronicler is Grant Brisbee, a San Francisco-based web reporter who is impossible to fully embrace because he hates the team I love (the Dodgers) and loves the team I hate (the Giants). but on Vinny’s final day, Giants fans held up signs and stood and cheered and gave him a classy and heartfelt sendoff from an arch-rival, a rare instance of Dodgers and Giants seeing eye-to-eye on something.

When I think of things like that, I am now sure of this: We baseball fans probably won’t agree on anything the way we agreed on Vin Scully.

So goodbye to you, my fellow fans. And goodbye to the greatest storyteller I’ve ever been able to call my friend.

Dwyane Wade, Von Miller and April Ross are among the athletes who dress up to the nines on the eve of the ESPYs to celebrate getting nude for the iconic issue

From Super Bowl champions and NBA stars to Olympians and beloved sportscaster Craig Sager, the biggest names in sports gathered at the BODY at The ESPYS pre-party at Avalon Hollywood on July 12.