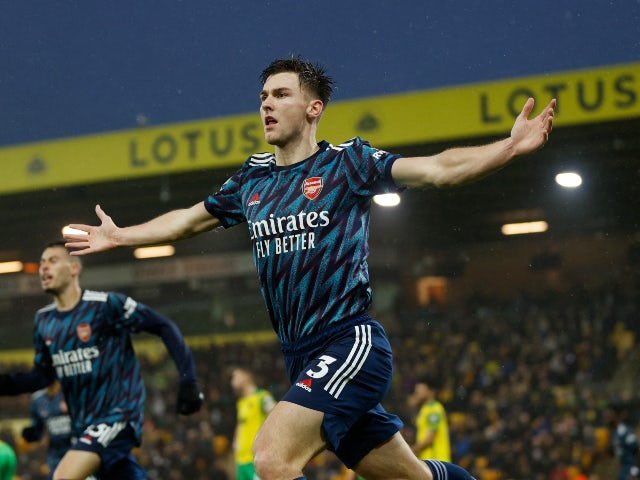 The Premier League champions remain in the market for a new left-back after allowing Oleksandr Zinchenko to join the Gunners earlier in the window.

Zinchenko made his Arsenal debut in the 2-0 win away at Crystal Palace last Friday, with Tierney replacing the Ukraine international for the final seven minutes of the contest at Selhurst Park.

Tierney underwent knee surgery in April which ruled him out of the final 10 Premier League games of last season, but he still managed to feature 25 times across all competitions for Mikel Arteta‘s side in the 2020-21 campaign.

According to the Daily Telegraph, Man City could turn their attention to Scotland international Tierney, who has established himself as a proven Premier League player since his arrival from Celtic in 2019.

It is thought that Arsenal have no plans to let Tierney leave the Emirates Stadium this summer, but should Zinchenko make the left-back spot his own, the 25-year-old’s game time in North London could be limited.

Meanwhile, City are currently finalising a deal for Anderlecht left-back Sergio Gomez after the Citizens reached an agreement with the Belgian outfit on Wednesday to sign the 21-year-old for a fee in excess of €10m (£8.5m).

Gomez is soon set to be announced as a new City player once he completes his medical and finalises personal terms.

The Spain Under-21 international is regarded by City as a development player who could either be sent out on loan for the 2022-23 campaign or who could provide cover for current first-choice left-back Joao Cancelo.

The Citizens intend to sign Gomez irrespective of their pursuit for a senior left-back this summer, and they are understood to have drawn up a list of alternatives to primary target Marc Cucurella, who has joined Chelsea.

As well as Tierney, the Daily Telegraph claims that Atletico Madrid‘s Renan Lodi is also on their radar, with the La Liga giants braced for interest in the Brazilian’s services in the final three-and-a-half weeks of the transfer window.

Borussia Dortmund‘s Raphael Guerreiro is another left-back who City have expressed their interest in, with the 28-year-old having just 12 months remaining on his contract with the Bundesliga club.

Stuttgart‘s Borna Sosa and Wolverhampton Wanderers‘ Rayan Ait-Nouri are also included on City’s shortlist, with the former believed to be valued between €20m (£17m) and €25m (£21.2m), roughly half the asking price of Ait-Nouri.

Manager Pep Guardiola indicated last month that City will try to recruit a left-back before the September 1 deadline, but insisted that he is happy with the current options at his disposal.

“If it’s possible (to sign a left-back), yes, if it’s not we stay,” Guardiola told reporters. “Joao [Cancelo] can play there, Josh [Wilson-Esbrand], Nathan [Ake]. I never complain about the squad I have since the first season. What the club can do is the benefit for the club not me. I support the club.”

City have spent just under £100m so far this summer, with Erling Braut Haaland and Kalvin Phillips arriving from Borussia Dortmund and Leeds United respectively, while goalkeeper Stefan Ortega has joined the club on a free transfer from Arminia Bielefeld.