With Ricky Stuart at the helm, you’re either riding high or crashing spectacularly – with very little in between. ﻿

S﻿tuart’s win rate in the finals was publicised this week as being better than that of Wayne Bennett, Craig Bellamy and Trent Robinson, but it goes even further.

When teams are coached by Stuart, it’s all or nothing. They either bomb out before September, or make a deep run. 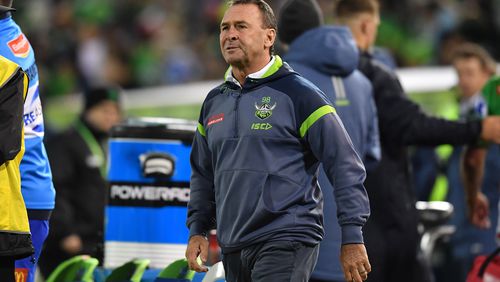 Since taking the Roosters to the title in 2002, his teams have made the grand final three times, and also lost three preliminary finals. Never has a Stuart team been knocked out in the first two weeks of the post-season.

Of course, those other campaigns include a 14th-placed finish with ﻿the Roosters in 2006, finishing 15th and 14th with Cronulla in the two seasons after a preliminary final finish (the latter getting him sacked), a wooden spoon in his sole Eels season and finishing second-last in his first year with the Raiders.

At CommBank Stadium in a few hours, he’ll look to continue that record, while the Eels have become the masters of an early finals exit.

Despite their solid regular seasons in recent years, they’ve never made it past week two under Brad Arthur.

Does that change tonight? ﻿