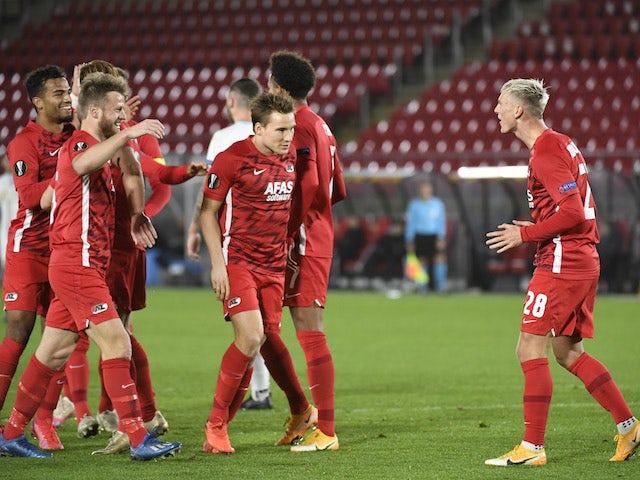 AZ Alkmaar and Go Ahead Eagles raise the curtain on their 2022-23 Eredivisie campaign when they lock horns at the AFAS Stadion on Sunday.

Pascal Jansen‘s side head into the weekend off the back of a 1-0 loss against Dundee United in the Europa Conference League qualifiers, while the visitors will be looking to snap their five-game winless run in the league.

AZ Alkmaar secured a fifth-placed finish in the Eredivisie last season — their lowest league finish since the 2016-17 campaign — after picking up 61 points from 34 games.

However, AZ enjoyed a solid run in the playoffs for the Conference League qualifiers as they saw off Heerenveen in the semi-finals before claiming an emphatic 7-3 aggregate win over Vitesse in the final.

This was followed by a fine pre-season campaign, where the Kaaskoppen went unbeaten in four of their five friendly outings, claiming three wins and one draw in that time while scoring seven goals and shipping court.

AZ Alkmaar head into this weekend’s league opener off the back of a 1-0 loss against Dundee United when Glenn Middleton handed the Scottish side a first-leg win in their Conference League third-round clash last Thursday.

Meanwhile, Go Ahead Eagles wrapped up their preparations for the new Eredivisie campaign on a high as they saw off Greek outfit OFI Crete 4-1 in their final pre-season game last Friday.

In a one-sided affair at the De Adelaarshorst, Finn Stokkers, Isac Lidberg, Jose Fontan and Bas Kuipers scored four straight goals to put the visitors to the sword before Juan Angel Neira pulled one back in the 71st minute.

Rene Hake‘s men, who picked up three wins from their six pre-season games, now turn their sights to the Eredivisie, where they are currently on a run of five straight defeats after failing to pick up any points from their final five games last term.

This dire close to the 2021-22 campaign saw Go Ahead Eagles miss out on a place in the playoffs for the Conference League qualifiers as they finished 13th in the table, five points off Heerenveen in the final playoff spot.

Next up for this weekend’s visitors is the stern challenge of taking on a rampant AZ Alkmaar side who have won their most recent three meetings and are unbeaten in each of their last six since a 2-1 loss back in February 2014.

Go Ahead Eagles form (all competitions):

AZ Alkmaar will take to the pitch without the services of Yukinari Sugawara and Jesper Karlsson, who are currently recuperating from knee and muscle injuries respectively.

Zinho Vanheusden has been out of action since last February, while 22-year-old Peer Koopmeiners remains out of contention after missing the last two games through injury.

Jesper Karlsson was a star performer for the Kaaskoppen last term as he registered 27 goal involvements in 34 league games and the Swedish midfielder will be one to keep an eye out for.

Meanwhile, Go Ahead Eagles will be without 30-year-old defender Gerrit Nauber, who is set to sit out his fifth straight game through a muscle injury.

Hake will also be unable to call upon the duo of Jahnoah Markelo and 24-year-old defender Rashaan Fernandes, who have been sidelined through injuries.

While Go Ahead Eagles will be looking to build on last Friday’s win and end their losing streak in the Eredivisie, they go up against a solid AZ side who are unbeaten in seven of their last eight meetings. Given the gulf in class and quality between the two sides, we are backing AZ to claim a comfortable win on Sunday.