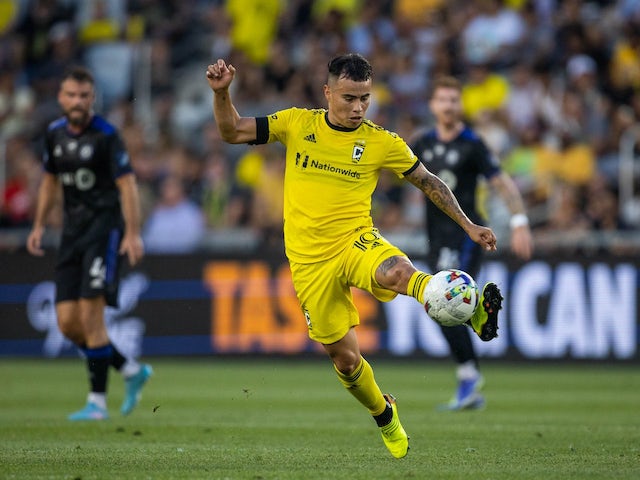 New York City FC will attempt to extend their seven-game unbeaten streak when they face Columbus Crew in the MLS on Saturday.

The hosts, meanwhile, will look to bounce back from a midweek defeat to CF Montreal, which ended a run of nine matches without defeat.

After their away meeting with Charlotte FC last weekend was abandoned due to bad weather, Columbus turned their attention to a midweek game against Montreal.

The Crew seemed to be on course for a home victory after Lucas Zelarayan had given the hosts an early lead in the 14th minute.

However, Kei Kamara equalised in the 88th minute before Joel Waterman grabbed the winner in the fourth minute of stoppage time to condemn Columbus to their first defeat since May 21.

Despite losing in midweek, the Crew still occupy a playoff place, although the sixth-placed side in the Eastern Conference are only one point clear of Inter Miami, who sit in eighth position.

Looking for a response after the defeat to Montreal, Caleb Porter‘s side will draw confidence from the fact they have won their last three home games against NYCFC.

The visitors, meanwhile, are currently battling it out for top spot in the Eastern Conference, with three points separating them from Philadelphia Union, who sit in first place.

NYCFC have the advantage of holding one game in hand, which could prove crucial if they are to move above Philadelphia before the regular season comes to a close.

Although they are enjoying a seven-game unbeaten run, interim boss Nick Cushing would have been disappointed that his team missed the opportunity to clinch a fifth consecutive victory last weekend.

A goalless away draw against Montreal ended New York City’s winning run, although the result ensured they kept a fourth consecutive clean sheet.

Saturday’s visitors may have struggled in their recent away meetings with Columbus, but they can take confidence from the 2-0 home victory they picked up against the Crew in May.

Columbus have no new injury concerns ahead of the meeting with New York City, which could result in Porter naming an unchanged lineup.

Zelarayan is currently Columbus’ top-scorer after scoring his sixth goal of the MLS season in midweek, and the 30-year-old will look to provide a goal threat once again on Saturday.

Cucho Hernandez has scored four goals in six games since joining the club, and the striker will aim to add to that tally when he leads the line at the weekend.

As for the visitors, they will without the services of Anton Tinnerholm, Keaton Parks and Maxime Chanot, who are all sidelined due to injury issues.

Alfredo Morales is available after serving a one-match suspension, and the 32-year-old is expected to return to the starting lineup for Saturday’s contest.

There could also be a place in the side for Nicolas Acevedo, who featured as second half substitute in the goalless draw with Montreal.

New York City have proven to be a tough team to beat this season, and although Columbus usually fare well at home against Saturday’s opponents, we think the hosts will have to settle for a draw.

Our expert tipster partners at Sporita.com are predicting under 3.5 goals in this match. Click here to find out what else they are predicting for this game and for more of their tried-and-tested football tips.Under 3.5:data
ID:491567:1false2false3false:QQ:: from db desktop :LenBod:collect9640: