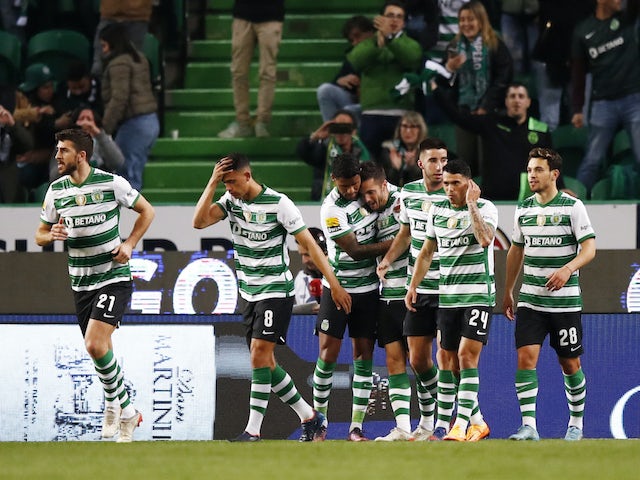 Ruben Amorim‘s side are currently on a run of six wins from their last seven home games in the league and will be looking to maintain this fine run of results.

Sporting Lisbon were denied a dream start to the 2022-23 Primeira Liga campaign as they were held to a thrilling 3-3 draw by a dogged Braga side at the Estadio Braga Municipal last Sunday.

The Leoes took the lead on three different occasions courtesy of Pedro Goncalves, Nuno Santos and Marcus Edwards but the visitors hit back with goals coming from Simon Banza, Sikou Niakate and Abel Ruiz as both sides settled for a share of the spoils.

This followed an unconvincing pre-season run, where Sporting Lisbon failed to win four of their five friendly outings — picking up three draws and losing once — with a 3-2 victory over Jose Mourinho‘s Roma on July 19 being the exception.

Sporting Lisbon now welcome Rio Ave to the Estadio Jose Alvalade, where they have won all but one of their last seven league games since the start of February, scoring an impressive 17 goals and keeping five clean sheets in that time.

One year on from going down in the 2020-21 campaign, Rio Ave secured an immediate return to the Portuguese top flight as they clinched a first-placed finish in the Segunda Liga last season.

The Vilacondenses, who were beaten by Arouca in the relegation playoff in May 2021, picked up 21 wins, seven draws and lost six of their 34 league games last season to pick up 70 points and claim the league crown with a two-point cushion over second-placed Casa Pia.

After picking up one win from their three pre-season games, Rio Ave failed to announce their return to the Primeira Liga in style as they were condemned to a 1-0 home defeat at the hands of Vizela last Saturday.

Despite being on the front pedal for most of the game and seeing 65% of the ball possession, Luis Freire‘s men were guilty of a toothless display in attack as Nuno Moreira netted the only goal of the game to hand the visitors all three points.

While Rio Ave will be looking to quickly clean the dust off their feet and get their top-flight campaign up and running, next up is a rampant opposing side who are unbeaten in 15 of their last 20 encounters, claiming 11 wins and four draws in that time.

© Reuters
Sporting Lisbon will take to the pitch without the services of 23-year-old midfielder Daniel Braganca, who has been out of action since May through an ACL injury.

Off the back of a fine attacking display against Braga, Amorim could name an unchanged front three of Paulinho, Barcelona loanee Francisco Trincao and Goncalves, who registered 14 goal involvements in the league last season.

However, English forward Edwards could push for a place in the starting side after the 23-year-old came off the bench and capped off a brilliant cameo with an 83rd-minute goal last weekend.

Meanwhile, Junio Rocha is a long-term absentee for Rio Ave as the 25-year-old defender continues his road to full fitness after suffering a severe fibula injury.

Head coach Freire will watch from the stands this weekend after the 36-year-old picked up a red card in a heated opening-day defeat against Vizela last weekend.

Sporting Lisbon have enjoyed the better of this fixture, picking up 11 wins from their last 20 meetings, including a 2-0 victory in their most recent encounter. Amorim’s side put on a fine attacking display last time out and we predict a repeat of the same this weekend, with the visiting side being on the receiving end of a heavy defeat.

Our expert tipster partners at Sporita.com are predicting over 1.5 goals in this match. Click here to find out what else they are predicting for this game and for more of their tried-and-tested football tips.Over 1.5:data
ID:492092:1false2false3false:QQ:: from db desktop :LenBod:collect10967: