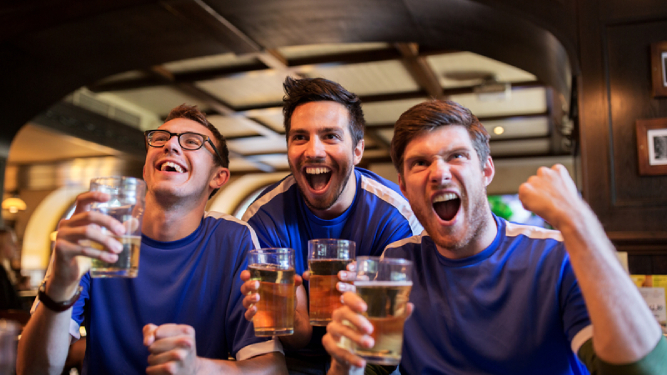 PUBS are the perfect place to watch the Premier League on a big screen and make lunch unendurable for innocent bystanders. Football fan Wayne Hayes explains how.

Shout at the players

Immerse yourself in the game by bellowing advice to trained professionals as you down another pint of Carlsberg. They won’t be able to hear you because they’re on a television screen and you’re in a pub, but the elderly couple near the quiz machine will be intimidated into silence. Which is good because they were cutting their food a bit too loudly.

There’s nothing like a boisterous, insulting chant to recreate the atmosphere of a packed football stadium. That atmosphere being an outright air of violence with xenophobic undertones. For that extra touch of authenticity, throw your pint at the screen.

Carrying your pints from the bar to your table takes two seconds, but anything can happen in that time. Make sure you and your mates don’t miss a single pass or fake dive by drinking at the counter and chatting to the barman about this season’s lousy performance. If other people want to get served they can try a different pub.

It’s a good thing when your team kicks the football into the other team’s goal, so articulate your happiness in a normal fashion by punching the air and swearing until you’re red in the face. The family trying to eat next to you will be grateful you’ve taught their kids some new words.

While the rest of the pub is relieved your tedious match is over, you can prolong the misery by insisting the landlord sticks on the post-match analysis. This gives you a chance to shout at the telly all over again as the highs and lows are replayed in slow motion, accompanied by some deathly dull pundit commentary and your worthless opinions.